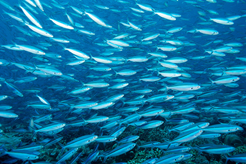 Where to start in a sea of new Customer Experience Technology

This article was originally published on About Match’s UK website www.aboutmatch.co.uk

The biggest change in the world of contact centre technology over the past several years has been the rise of mobile and digital channels. It’s been a case of “follow the consumer”, as organisations frenetically play catch-up to deploy new technology to feed their customers’ insatiable digital appetites.

END_OF_DOCUMENT_TOKEN_TO_BE_REPLACED 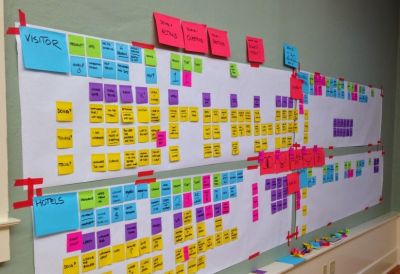 “Be nice to people on your way up, because you never know who you’ll meet on your way down!” is one of my mother’s favourite phrases. It might be redolent of the days of a more linear career progression, but surely good advice all-round.

An acid test of a brand and how they really feel about customers and how to treat them is when you’re leaving. We talk a lot about customer journeys, but often the most memorable stage is the point of departure. How do we feel about a brand that we’re moving away from – and how does the brand’s behaviour as we end our transactional relationship impact on our future perception?

END_OF_DOCUMENT_TOKEN_TO_BE_REPLACED 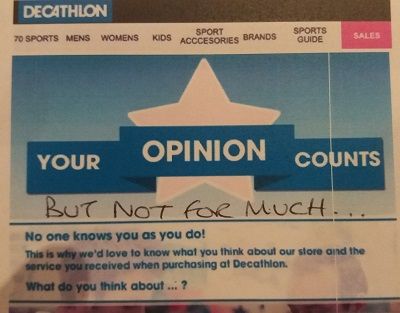 I love Decathlon. I’ve recently bought a new bike there. It was great value and I’m very pleased with it. I’ve been in twice since to buy more accessories.

So, why am I starting to feel dissatisfied?

The reason, oddly, is that Decathlon has tried to get my feedback on my experience in store. You might think I’d be all for the sort of thing, but here’s why it’s not working out for either of us.

END_OF_DOCUMENT_TOKEN_TO_BE_REPLACED 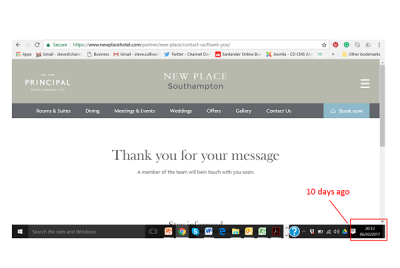 It’s two weeks since I wrote a blog article about my frustrated attempts to get through to New Place, a Principal Hotel Company hotel, to see if they had a gym:
www.linkedin.com/pulse/who-we-again-steve-sullivan

END_OF_DOCUMENT_TOKEN_TO_BE_REPLACED 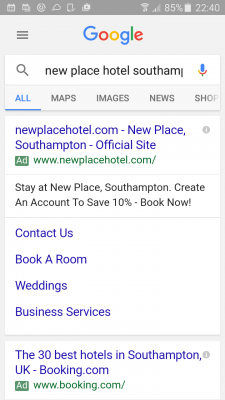 Who are we again?

Tomorrow I’m staying at the New Place Hotel in Hampshire, part of the Principal Hotels group. It looks like a lovely place, but it wasn’t clear to me from the website if it had a gym. So, this evening I did a quick search on my phone and top of Google’s list was the hotel’s own site:

END_OF_DOCUMENT_TOKEN_TO_BE_REPLACED 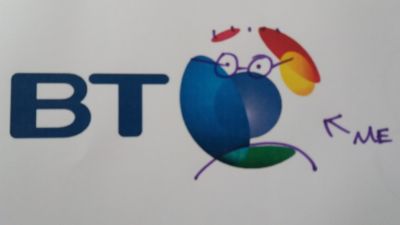 The doctor is in! 3 customer service suggestions for BT

Our BT broadband failed the other week, for the second time in the space of a few months. I wasn’t happy. But it gave me the opportunity to get a real-world BT customer experience. And it wasn’t great.

However, I have come up with three practical observations and tips for BT – and indeed any of us responsible for customer service and fault rectification. All three should be very easy to implement. They don’t need a radical overhaul of how BT manages its customer service operation or their underlying technologies (both of which are no doubt complex and hard to improve). It’s just a matter of thinking about how they use their current solutions and techniques.

END_OF_DOCUMENT_TOKEN_TO_BE_REPLACED 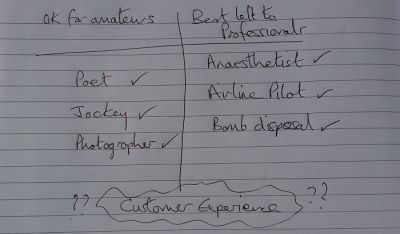 Customer Experience: Too Important to Leave to the Professionals?

A little while ago I sat in a conference room listening to a (rightly) well-respected customer experience guru propound the importance of Customer Experience becoming a profession. Through recognised qualifications, methodologies and practitioner groups Customer Experience could become established and respected.

It’s hard to argue with that logic. Over the past few decades HR, technology and marketing have joined legal services and accountancy to gain perceived stature through becoming recognised as professional activities, best trusted to qualified experts. Even in a world of work where it’s increasingly difficult for outsiders to understand from job titles what people actually do, there is organisational cachet and implied authority from having a ‘professional job’. And professional roles and disciplines tend to become indispensable by being ‘baked in’ to organisational design and operating models.

Great. As far as it goes.

END_OF_DOCUMENT_TOKEN_TO_BE_REPLACED

Who’s Afraid of the ICO?

Who’s afraid of the UK’s Information Commissioner’s Office (ICO)? Well, in a sense we all should be. Getting on the wrong side of the ICO can lead to reputational damage, massive fines and possible closure. And the organisations that do find themselves under the ICO’s scrutiny aren’t just the ‘usual suspects’ of dodgy telemarketers, spammers and con artists.

I’ve been on the Information Commissioner’s Office’s website looking at the firms and organisations that have experienced the ICO’s most serious enforcement actions, since last March. Those actions are
• Prosecutions
• Enforcement Notices
and
• Monetary Penalties
The exercise has yielded some interesting results.

END_OF_DOCUMENT_TOKEN_TO_BE_REPLACED 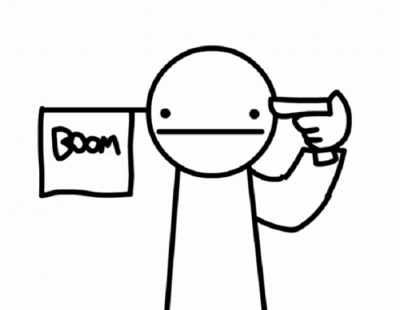 Telemarketing – The Industry That Killed Itself?

These are challenging times for organisations which make large-scale outbound calls using predictive dialler technology. The UK communications regulator, Ofcom, is undertaking a ‘Review of how we use our persistent misuse powers: Focus on silent and abandoned calls’ http://stakeholders.ofcom.org.uk/binaries/consultations/silentcalls/JAP_Update_Dec2015.pdf.

In its initial discussion paper http://stakeholders.ofcom.org.uk/binaries/consultations/review-of-how-we-use-persistent-misuse-powers/summary/Persistent_misuse.pdf Ofcom has provided some suggested changes to their regulations to help address the problem of – what their research claims are – 4.8 billion nuisance calls made annually. Amongst other changes, Ofcom appear to be proposing that the number of ‘abandoned calls’ (that is, calls which are made but are then automatically terminated by the contact centre because no-one’s available at the contact centre end to handle the call – typically because the predictive dialler’s been set to slightly ‘over-dial’ or its algorithms have got it wrong) from 3% to 3.

I’m not entirely clear whether that’s 3 per month, or what, and there are various questions and ambiguities about exactly what is meant by Ofcom in the review. No doubt because of this, the DMA has successfully lobbied Ofcom to extend the original consultation period by two weeks to Wednesday 24th February. A team from the DMA are meeting with Ofcom this coming Tuesday (2nd February 2016).

END_OF_DOCUMENT_TOKEN_TO_BE_REPLACED 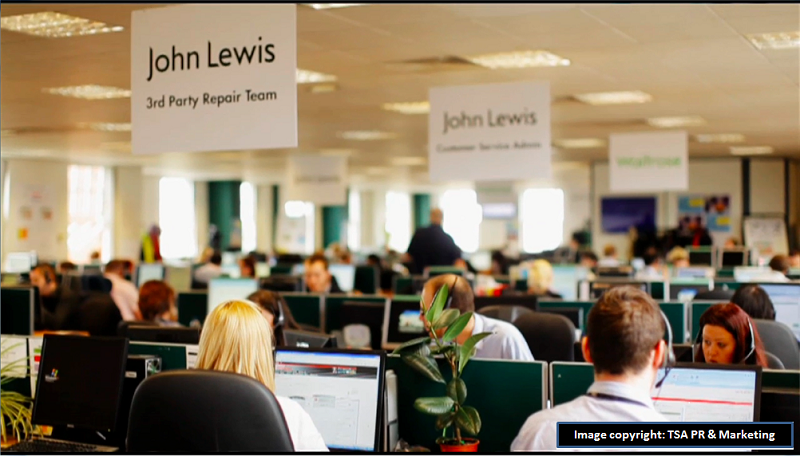 John Lewis Partnership: What Went Wrong? (Unless It Didn’t)

Today, the last Monday before Christmas, is ‘Panic Monday’ for many retailers. According to modern tradition, it’s the day that customers decide it’s too late to buy presents online, so go (physical) shopping. In turn, that creates demand for switches from couriered delivery to ‘click and collect’ fulfilment, late-cancelled on-line orders, a need to for clarity and accuracy in differing stock levels between online and store locations, and so on. All this is grist to the mill for those of us interested in the omni-channel customer experience, but it’s likely to prove to be a difficult day if you’re working in a retailer’s contact centre.